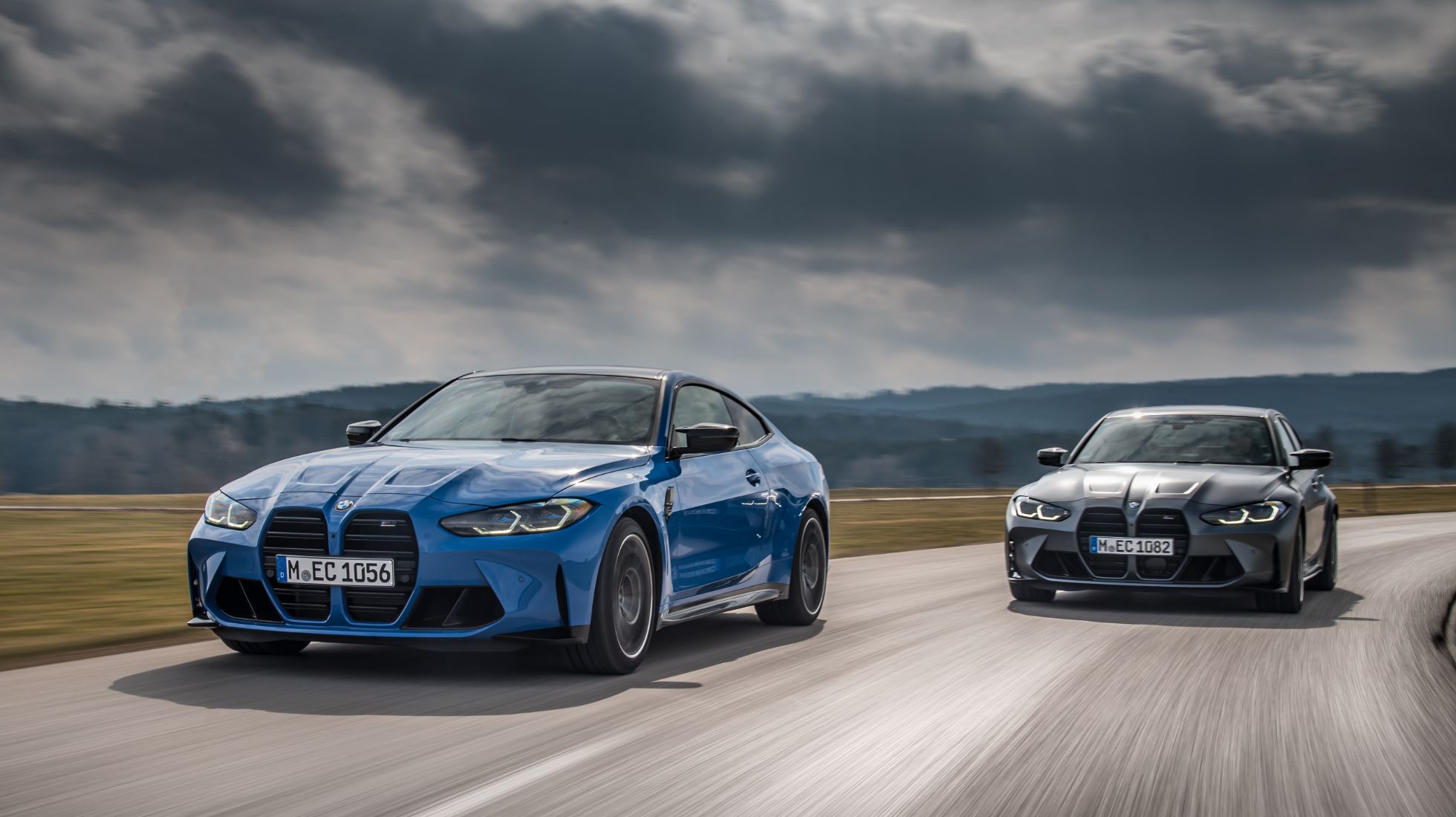 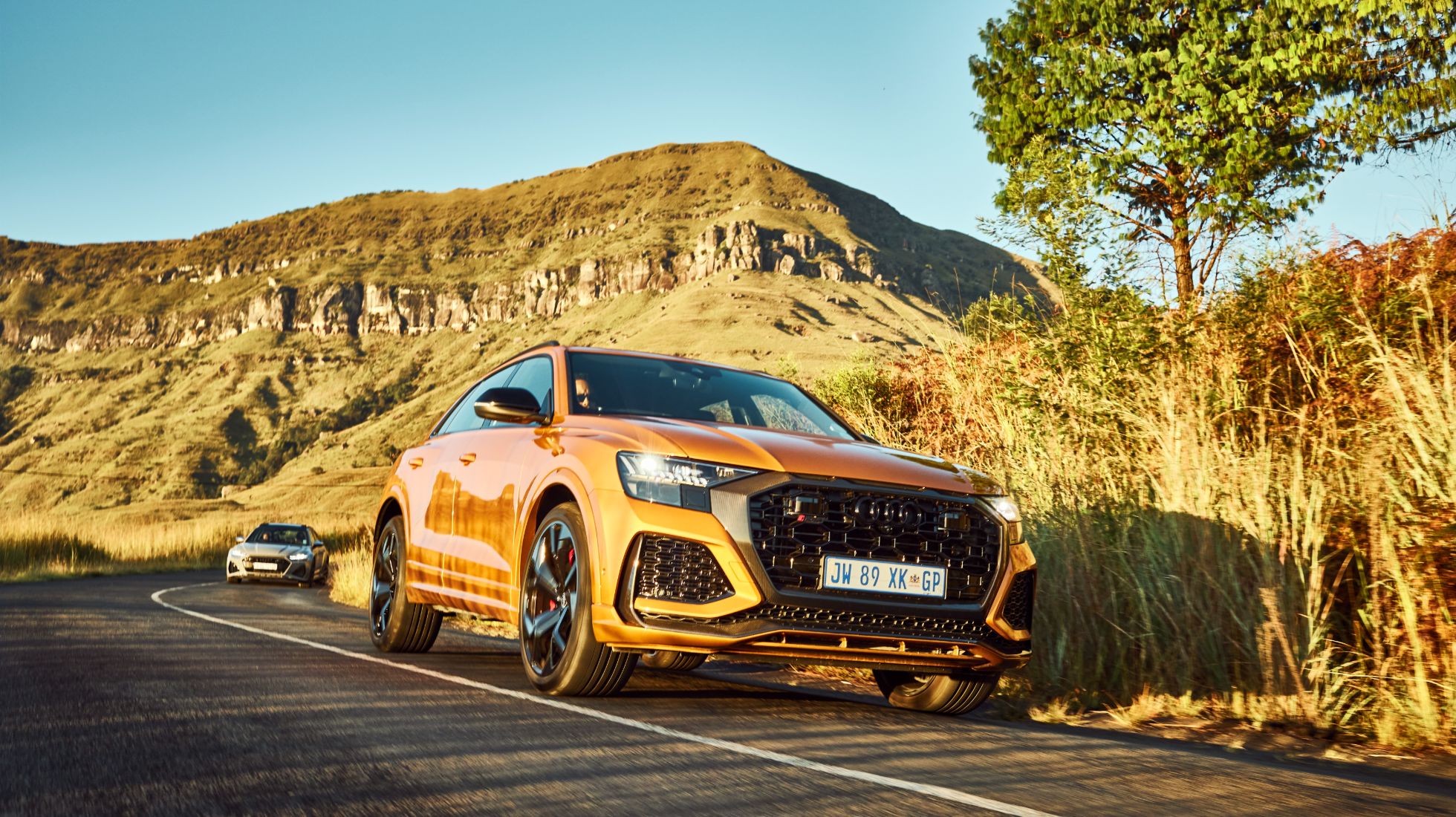 The N3 between Johannesburg and Durban is an artery of commerce heaving with thrums of traffic all day long. It forms part of the first leg of our road trip as we make our way to the Champagne Valley in the Drakensberg, on a mission to answer that all-important question concerning Audi's latest RS weapons.

Audi's RS Q8 comes with international acclaim with a certain track record in its repertoire. It's eye-catching, to say the least, finished in a dramatic Dragon Orange sitting on 23-inch, 5-Y-spoke black alloys.  Audi has set this flagship apart through the menacing use of a blacked-out honeycomb grille flanked by solid air inlets also finished in black trim. At the rear, the RS Q8 sports an RS-specific diffuser lip and those glorious oval tailpipes finished in black.

The RS 6 Avant commands street cred in spades, as it continues to sell exceptionally well in SA, despite the market being generally averse to station wagons as it were. It cuts quite the imposing pose, with metal tightly stretched over the blistered wheel arches, much like a beefy bouncer in a Saville Row suit. Those blistered arches are home to 22-inch wheels that look achingly good in their throwing star design and dished ever so slightly. These are wrapped with slivers of tyre with a mere 30 side profile, great for aesthetics, but not particularly practical for pothole-strewn roads as we have in Mzansi.

To be frank, the front-end of the car does look a tad fussier than the outgoing model, but when parked next to one another, the new car definitely looks to be the more aggressive of the two. Our tester, cloaked in a Nardo Grey suit looked quite the business in contrast to the Dragon Orange of the RSQ8. At the rear, the signature dual-oval RS exhaust pipes, which emit a rambunctious timbre, leave you under no illusion that this is no humdrum A6 Avant. I like the overall design, the hunkered-down look and the way it steers.

So, the question still begs: which one? These are performance machines no doubt, but they boast practicality and space aptly created to haul luggage and people. The plot is simple. Both the publisher and I fit the profile 'married with kids.' We have 3 children of similar ages and opted for a family road trip to the Berg, bags and all, for a whole weekend. Our mission is to determine whether you actually can do this in either of these cars and then of course, if we had to choose just one, which one would make the cut.

Our pre-trip inspection (of each other’s packing skills) takes place in Heidelberg just outside of Jozi. We’re suitably impressed – all luggage is fitted into the boots quite nicely without any conspicuous paraphernalia perched high in the boot blocking our rearview. And yes, the rear bench of the RS6 Avant is equally comfortable, that’s including a baby car seat. The Avant trails the RS Q8 by 40-litres as far as luggage space is concerned, but that is mostly attributable to the RS Q8 having a slightly higher roofline, thus the marginally bigger boot space.

In the mid-afternoon, we set off straight onto the N3 for a casual course towards Harrismith. It's a perfect time to unlock some of the technology loaded into these cars. Adaptive Cruise Control takes over and keeps us at the national speed limit. It feels achingly slow thanks to air suspension and impeccable cabin damping. The ride comfort is a peach so far, giving us a chance to crank up the road trip playlist through the optional Advanced Bang & Olufsen sound system, whilst our backsides are being cooled by the ventilated seats. That’s all of us by the way, not just the front seat occupants. We’re now familiar with this new Audi cabin layout and functionality. In the RS Q8, Audi’s Virtual Cockpit with MMI Nav Plus and wireless charging is all standard fare – a definite feather in its cap.

It’s a fairly uneventful drive down the busy N3 before we opt to head off onto the R74 at Harrismith. The sun is starting to call it a day and it’s that oh-so-perfect time for pictures. It’s the not-so-subtle Dragon Orange that seems to be popping in the contrasting sunlight. The RS 6 Avant in this Nardo Grey is the very opposite, instead seeming to soak in the rays and enact that sleeper role for which the previous generation has become known and celebrated.

Much less traffic on the R74 lulls us into opening the taps of these two V8s for the first time and as the sun bids us farewell, the standard Matrix LED headlights are called into action. They’re so good, keeping most of the road lit; even ahead of an oncoming car or when trailing behind one. We know Audi does lighting very well but being able to really make use of them on these dark roads is a boon.

The roads are pleasant enough as we approach the Sterkfontein Dam and Nature Reserve. From here, though, we cross into KZN and the roads aren’t quite as welcoming. We’re into the windy mountain pass that will take us down towards Bergville but the twisty tarmac isn’t as entertaining as we may have liked. The asphalt is rough and it’s evident that rainfall has cracked through the tar revealing plenty of open pores. The RS Q8 is less affected by this but we soon realise that even larger profiled rubber won’t be a match for some of the gargantuan holes in the ground. The RS 6 Avant is suffering the most and our convoy has ebbed to a crawl. Even our Volkswagen Amarok camera vehicle is struggling somewhat to navigate these large craters.

After a calm final leg, we arrive at Champagne Sports Resort to much fanfare – even if we have to say so ourselves. It’s a welcome we need after the stress of navigating potholes and our hideout for the upcoming weekend allows us to argue the point. The RS Q8 is making more sense now simply due to its larger breadth of use. Those 23-inch profiles, whilst large, and lower profile than non-RS-badged fare, are still quite practical within the framework of Audi’s quattro and air suspension set up.

While the family continues to catch up on some 40 winks as it were, Avon and I are up at the crack of dawn to discover some rarefied roads at the foot of Cathkin Peak. We found them and unlocked the true performance potential of these two cars for the first time since we received them. It’s immediately clear how incredibly different these characters are. The RS6 Avant is a scalpel-sharp monster. Its demeanour is not far removed from that of a low-slung sports car. This latest quattro all-wheel-drive system has less propensity to understeer than systems of yore, ensuring that the RS 6’s nose tucks neatly into corners while handling is sure-footed and the tiller quite fleeting in lateral direction changes. “This is a fantastic car”, I keep reminding myself and the more time I spend in it, the more convinced I am that having one permanently parked in the garage is not an outlandish idea!

The RS Q8 on the other hand feels significantly more computerised and yet mind-bendingly fast. Equipped with active electromechanical roll stabilizers that are integrated into the 48-volt electrical system as well as all-wheel-steering and all-wheel-drive the RS Q8 admonishes corners in a way that defies your understanding of science. This is a 2,4-ton car with a high centre of gravity and space for my entire family and luggage – and yet, it masters corners with dextrous agility. Featuring two RS-configurable sport modes as part of the eight driving mode profiles, you can set up these buttons to your liking.

Where the RS Q8 suffers is in its communication to the driver through especially the steering. It feels dulled down and as said, computerised. You feel that the car is doing all the thinking for you and it is a very different driving experience than what you’d find in the Avant. Nonetheless, you quickly realise why the Nürburgring track record was beaten by this. What an eye-opener! From the braking to the high-speed cornering stability and of course that vicious accelerative force, this car is special indeed.

Choosing between these two is a near-impossible task on the grounds of preference –  both cars are spectacular in their own right. It really boils down to application, but during this particular sojourn, we both concede that the RS Q8 was the more practical vehicle of the two, as it better coped with the bad road conditions. However, on the billet smooth tarmac, we both agree that the RS 6 Avant is in a class of its own. 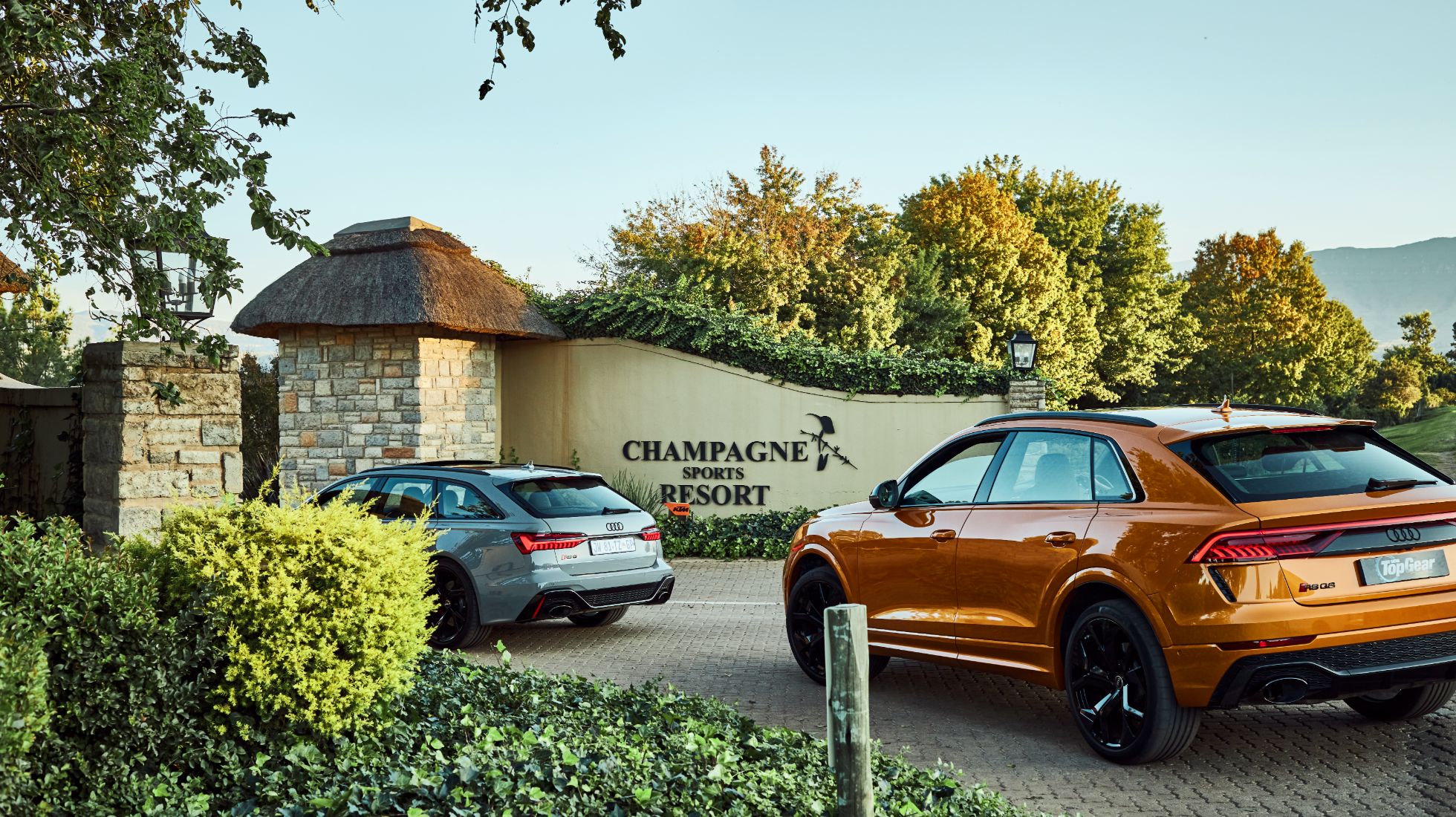